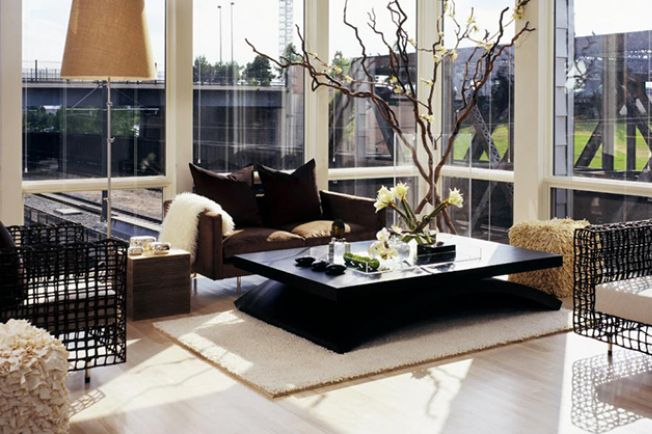 Coloradan design star John Moinzad stands out in numerous ways. As a designer and entrepreneur in every sense of the word, Moinzad has led the business side of multiple design brands and Colorado showrooms, designed spaces for celebrity events and private clients, and launched his own furniture line, Forged Modern. John’s multitasking in the industry has led him to be named to House Beautiful’s Top 25 list twice, and his own home crowned Colorado Home of the Year by Colorado Homes and Lifestyles. Apart from his achievements in print, he has dedicated as much effort to charitable efforts as he has to business ventures. As well as founding design businesses, he established Ventanas Behavioral Health Retreat, a sober living community in Denver. Meet John below, and take a look at some of his Forged Modern collection designs. 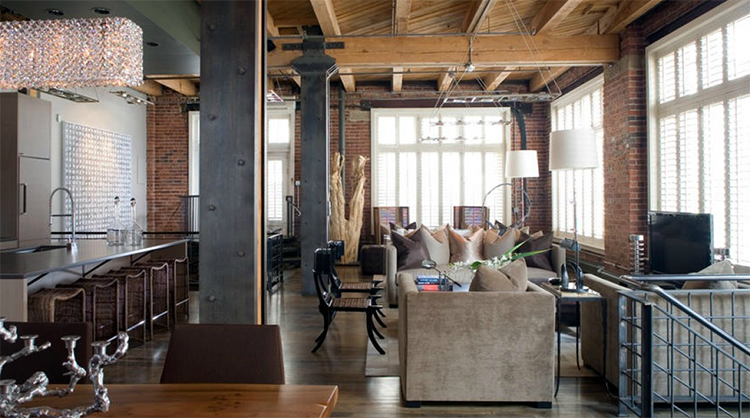 Rafters and steel beams are Moizad’s Coloradan take on contemporary.

John Moinzad: First of all trends should be set not followed. Consumers should take the time to identify style, color, fabric selections that most reflect who they are as an individual.

Andrew: Vintage or New
John: Both. Vintage pieces anchor any space and give authentication to any modern designed when mixed accurately.

Andrew: How do you define beauty?
John: Utter uniqueness! Rarity in itself in any element is both beautiful and valuable.

Andrew: Before leaving the house you always…
John: Look for my keys….and then remove at least three pieces of jewelry.

Andrew: Who is the contemporary inspiration in your field?
John: Lapo Edovard Elkahn. He is the Italian heir to Fiat. Lapo is a style ikon in every sense of the word when it comes to trend setting whether it be apparel, automotive, or anything regarding timeless staples mixed with edgy compliments. About John Moinzad | Colorado-born John Moinzad, is recognized as one of the West’s foremost interior designers as well as voted House Beautiful Top 25 Designers in the nation….twice. For decades John has brought discerning clients together with original one of a kind pieces, artwork, and compliments. Ultimately, John Moinzad is a renaissance man, whose talents and abilities move not only in the world of design, but his entrepreneurial spirit has taken John into the founding of businesses such as JMDH Interiors, TOWN Studio, to the trade showroom in the Denver Design Center, AERA Studios a design studio and showroom in Cherry Creek North, Thorn and French Interior Design, Designer Rubbish and his newest venture, Forged Furniture Modern which is the design and fabrication of commercial and residential furnishings to include outdoor. Forged Furniture Modern was recently shown at AD/Architectural Digest Design Show NY. John is a recognized artist represented by Saatchi Art. John personally designed, furnished, and hosted the celebrity retreat for the Alma Awards Los Angeles, as well as the Sundance Film Festival in Park City, Utah. John has also founded Ventanas Sober Living and has participated in such Charites as Global Downs, various Junior Symphony Guild Show Homes, an event supporting M.O.M.Y. (Mothers of Murdered Youth) and others too numerous to mention. John’s personal residence was recognized as Colorado Home of the Year by Colorado Homes and Lifestyles Magazine for 2009.